This guide is authored by Voxel Tycoon community member scailman.

This guide tries to show you how to create a locomotive for use in Voxel Tycoon.

In Voxel Tycoon you can create steam, diesel or electric locomotives, but in this guide we will focus on creating an electric locomotive. The guide is not intended to teach you modeling, so you must have a basic understanding of 3DS Max, Blender, Wings 3D, or any other program you want to use that allows you to import and export .obj files.

As in all games, there are certain recommendations that must be followed when creating a 3d model.

Apart from city buildings, trains and trucks are one of the most repeated assets in the game, and to avoid performance problems there are certain recommendations to follow.

Setting the model in the 3D modeling software¶

Vehicles are made up of different parts. In the case of trains, they are usually made up of the body of the locomotive, bogies, and wheels. Steam locomotives also have several rods depending on their complexity.

All the elements that make up a vehicle must have the coordinate axis in position 0,0,0, as shown in the following image: 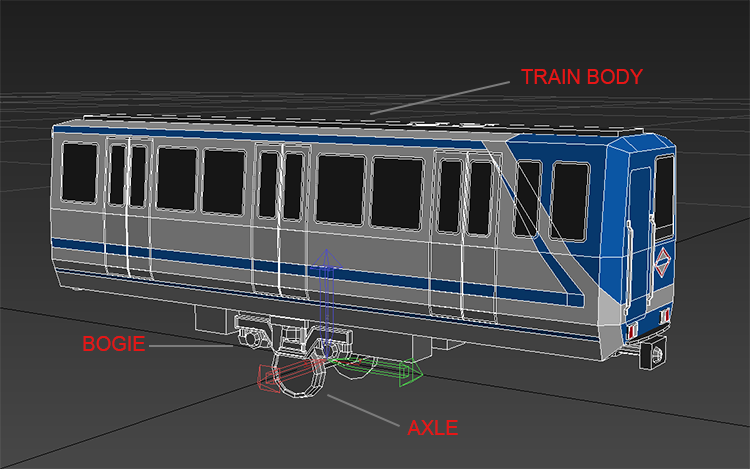 While creating the model of the locomotive, we can place each part in place to verify that the proportions are correct, but when exporting the model, each part must be placed as in the previous image.

The locomotive should be placed facing the front to the right (view left in the viewport in 3ds max. In other programs, the placement of the viewports may vary). 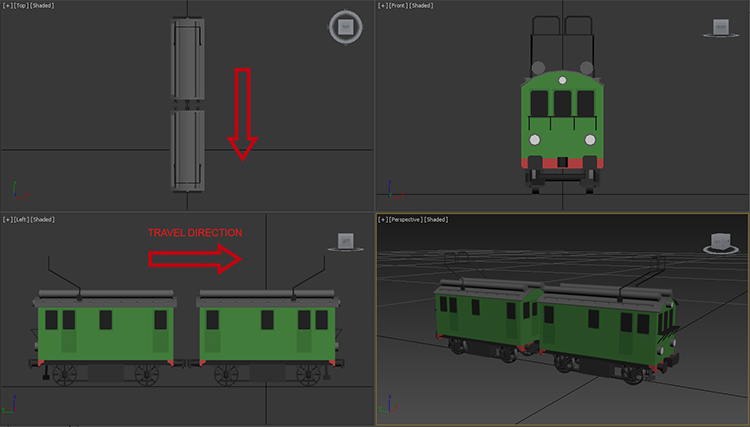 Texturing the model is done in the same way as a building. For this, I recommend reading the guide Creating your first content mod.

Like any asset in VT, it must be exported in .obj format, and the files must be contained in Content/<mod_name>. It's recommended to create the same directory structure that uses the base game for convenience.

Each part of the locomotive must be a single .obj file that will then be linked through the different configuration asset files that will be explained below.

This file is used to define the wheels of the locomotive. There is no limit to the number of axles that a locomotive or bogie can use, and each one can be a different size as in steam locomotives.

The file contains only two parameters:

Locomotives may or may not have bogies in real life, but it must always be defined in the game.

A bogie is made up of the mesh of the bogie itself and a section (axles) that define the type of axis and the position inside the bogie.

A bogie can have from 1 to n specified axes. 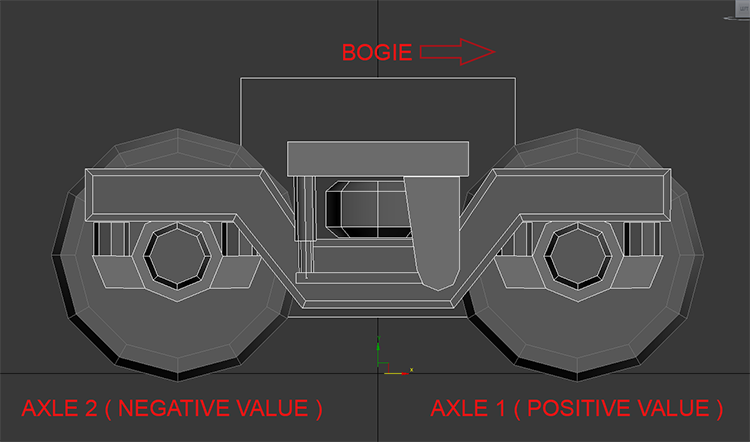 This is the main file of the locomotive and where the rest of assets are linked. Many assets can be customized, including the sounds (which we will not explain in this guide).

The .trainunit asset has several sections and parameters and looks like the following on an electric locomotive.

Some sections are null, that means it hasn't been specified, or that this parameter is automatically calculated by the game.

This asset allows defining a custom coupling for the locomotive that will make only locomotives and wagons that use the same coupling be able to be coupled.

This asset does not contain any parameters, and the file is empty, but it must exist in order to function properly.

In the game we can define that locomotives or trains will form a consist that cannot be separated, or that multiple vehicles will be purchased at the same time - such as the steam locomotives that when we buy one in the game from the purchase menu from the depot, we buy the locomotive and the tender as a set.

The file is divided into sections and you can indicate the number of minimum and maximum vehicles and what type a consist can have. 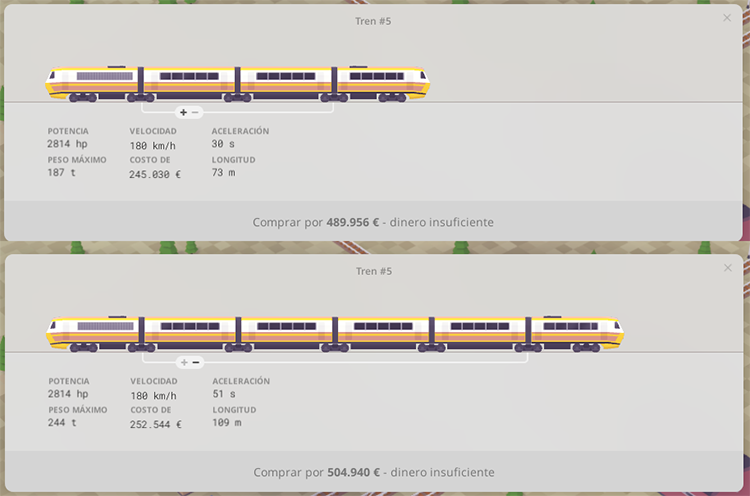 The parameters of this asset are quite explanatory.

They indicate the minimum and maximum number of vehicles that make up the composition, what type they are (.trainunit asset) and whether they are inverted or not, such as the case of the rear locomotive.

The .strings asset specifies the text that will be displayed in severals windows and menus in the game.

In this example, it's show the text of the name of the locomotive and the tender as separate units and the train set as it appears in the purchase menu window.

You can have as many .strings assets as languages you want in the same folder.